Some Effects of Local Corrosion

A common issue that I see in my role as a structural engineer is corrosion (and lots of it!). After finding some corrosion, I’m often asked: “how much strength has been lost”?

Sometimes the answer is obvious: 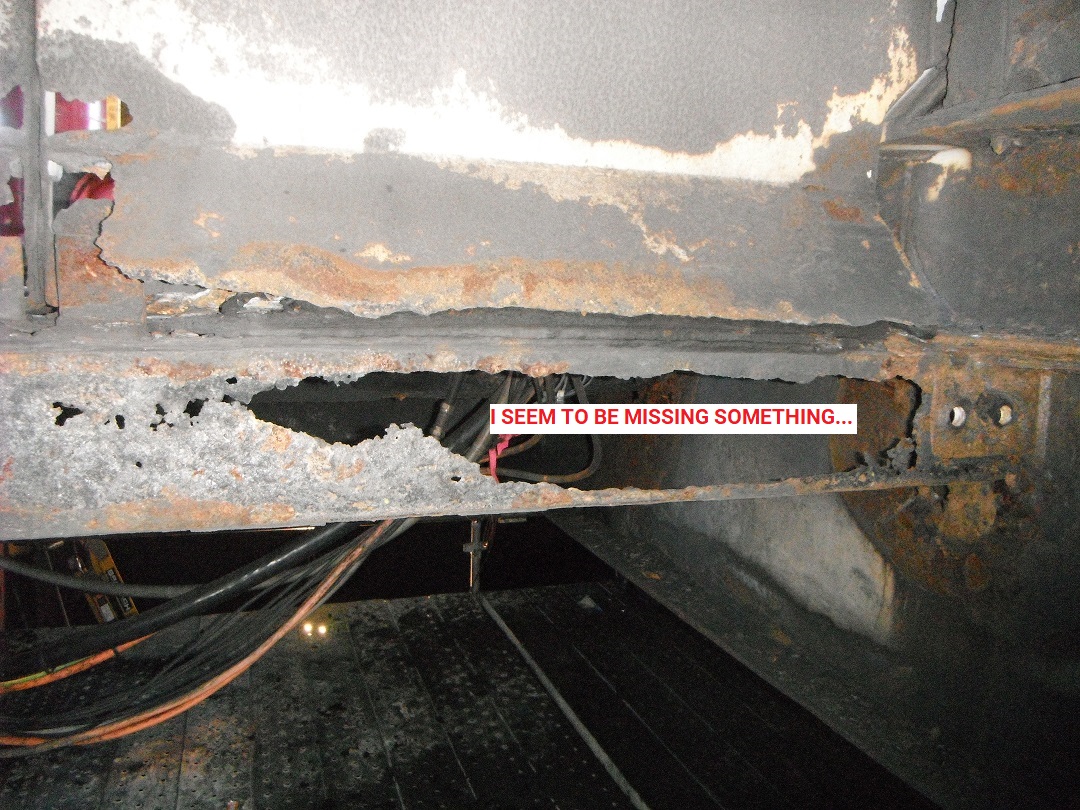 But often it’s a bit trickier, especially when small pits are located on large surfaces. 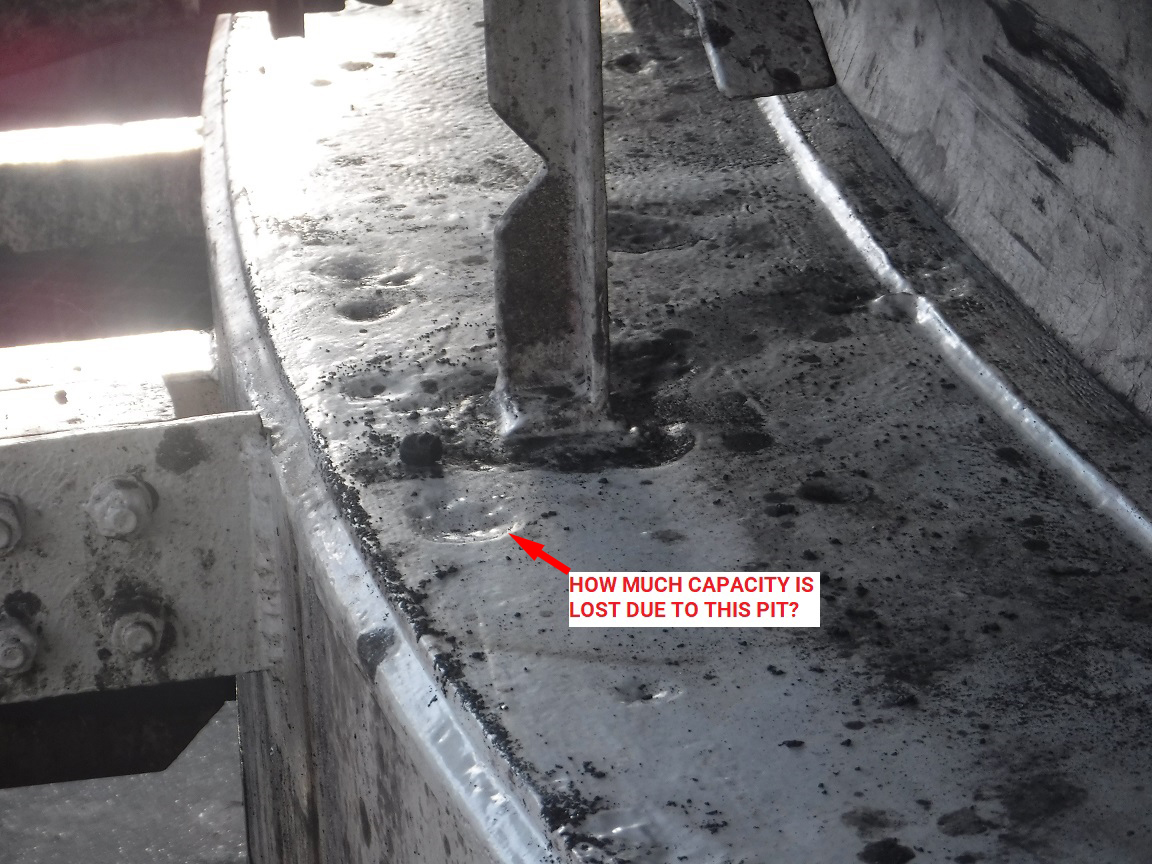 Since the potential ranges of pit size & location is effectively infinite, and there is a need to consider deflection, fatigue and ultimate limit states, it’s usually not possible to give an easy answer. The gold standard for determining the effects of corrosion is a Finite Element Analysis (FEA). However, this takes time and is not something that can be done rapidly on site. Therefore I thought I’d do some test models and trial some other potential methods for determining stress caused by corrosion.

For ultimate behaviour in tension it is usually assumed that the whole section can achieve the full yield strength of the steel. Local stress concentrations, eccentric moments etc. do not matter - as the section goes plastic these stresses will redistribute (provided the section doesn’t fracture first).

For compression loads though, buckling may occur and significantly reduce strength. Rather than occurring uniformly along the plate, yielding concentrates in a “plastic hinge” in the buckled zone. This is heavily dependent on plate thickness.

When considering fatigue (I’m ignoring deflection as it doesn’t usually affect my work), any stress concentrations are very important. Fatigue life is proportional to , and a 25% increase in stress halves fatigue life. Therefore the size of the corroded area, the depth of corrosion and the location (in both width & thickness) are all important.

To try and identify a simple approach that could be used to quickly determine the effects of corrosion, I brainstormed a number of possible ideas. The following seemed reasonable to me at first:

To test out some of these approaches, I decided to put together a series of test FEA models, using the following patch of corrosion: 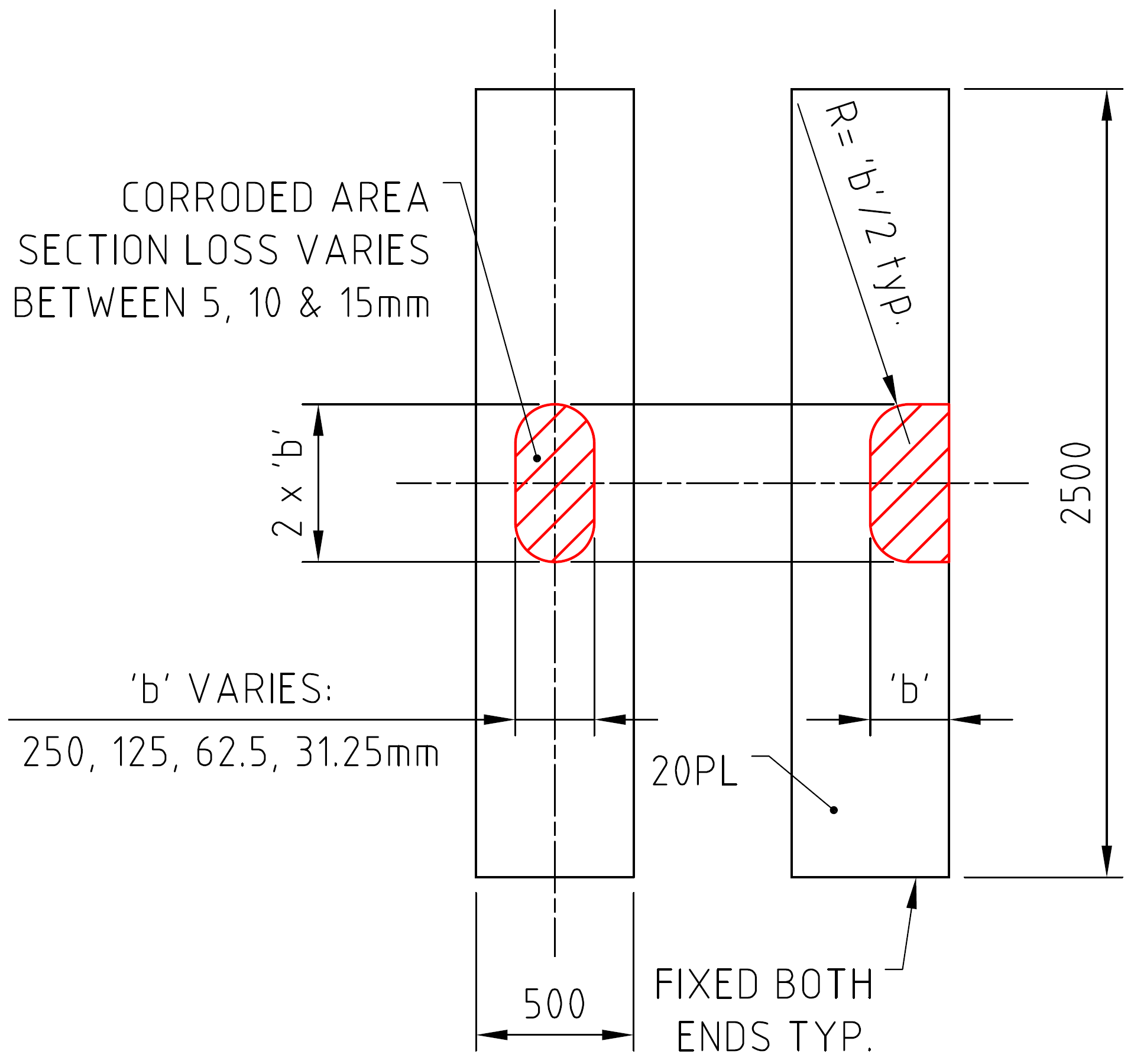 For stresses below ultimate, a linear-static analysis was carried out with a constant unit stress (1MPa) applied.

So What Did I Learn (If Anything?)

Ultimate behaviour of the corroded plates was basically as expected. In tension, the capacity depended entirely on the total section loss that occurred. All configurations analysed failed at a load determined only by the remaining area of steel. The following figure shows typical load-deflection curves: 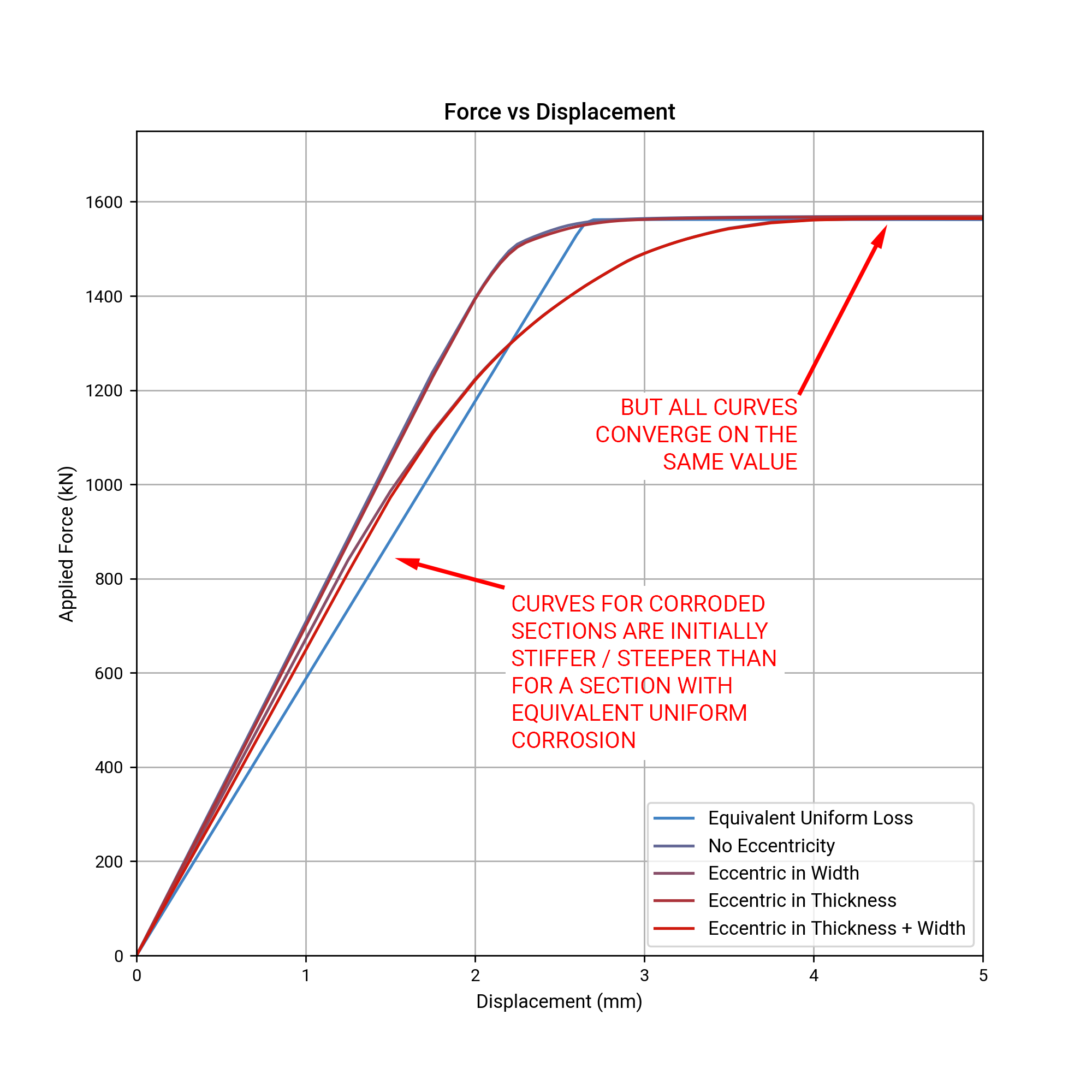 In compression there was a very wide spread of failure loads. Again, this was as expected, as compressive buckling is heavily dependent on thickness and secondary moments caused by eccentricity. In all cases, an equivalent uniform section loss gave a lower buckling resistance than the actual corroded models. Again, this was as expected because it concentrated the material closer to the centreline (where it has less ability to resist buckling) than in the corroded models (where the intact steel was distributed further away from the centreline). The following figure shows some sample load-deflection curves: 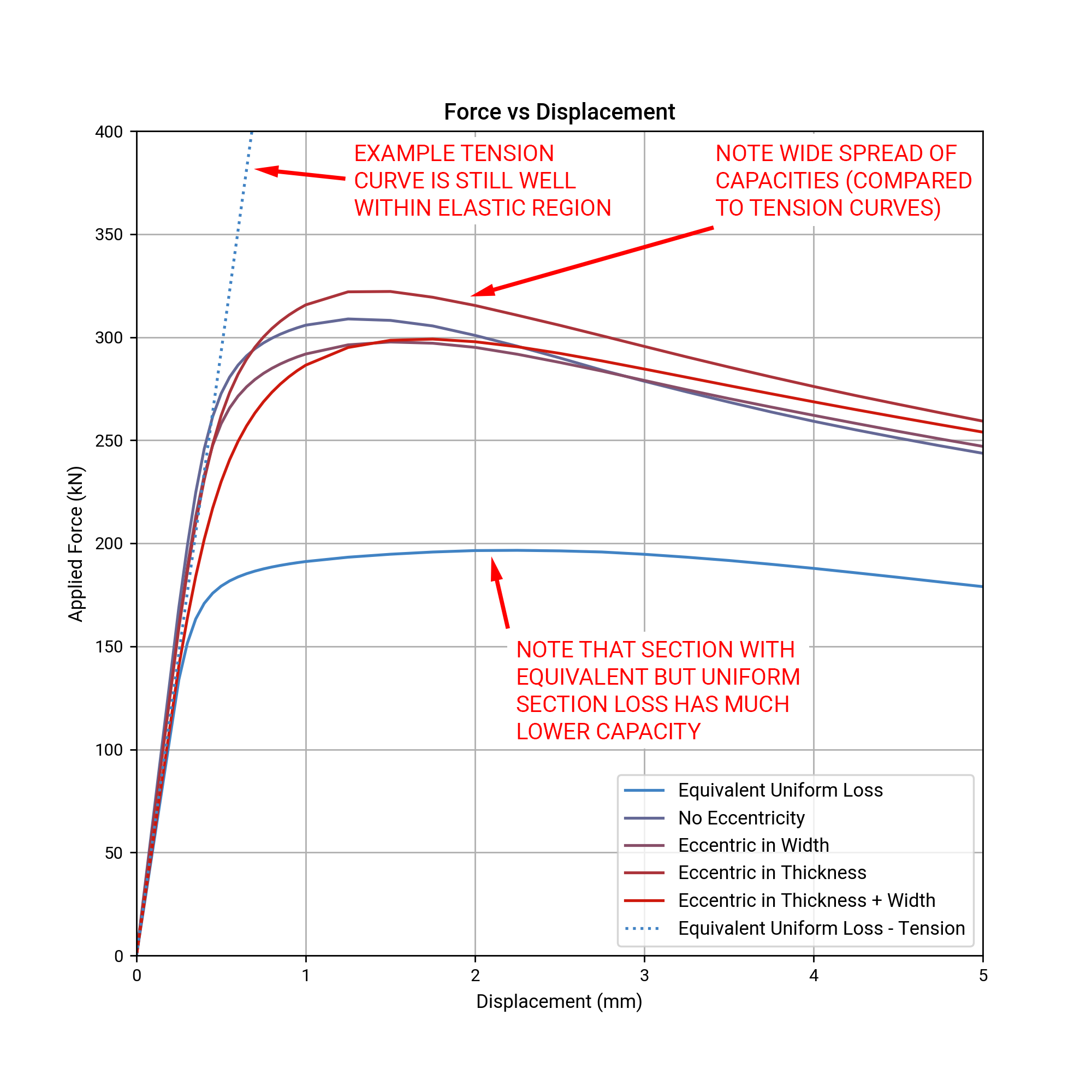 In contrast to ultimate behaviour, none of my approaches for determining stresses in the elastic range were accurate, even for preliminary site assessments. I was expecting them to be inaccurate, but I was astounded by just how inaccurate!

Using the reduction in area badly underestimates the increase in stress: 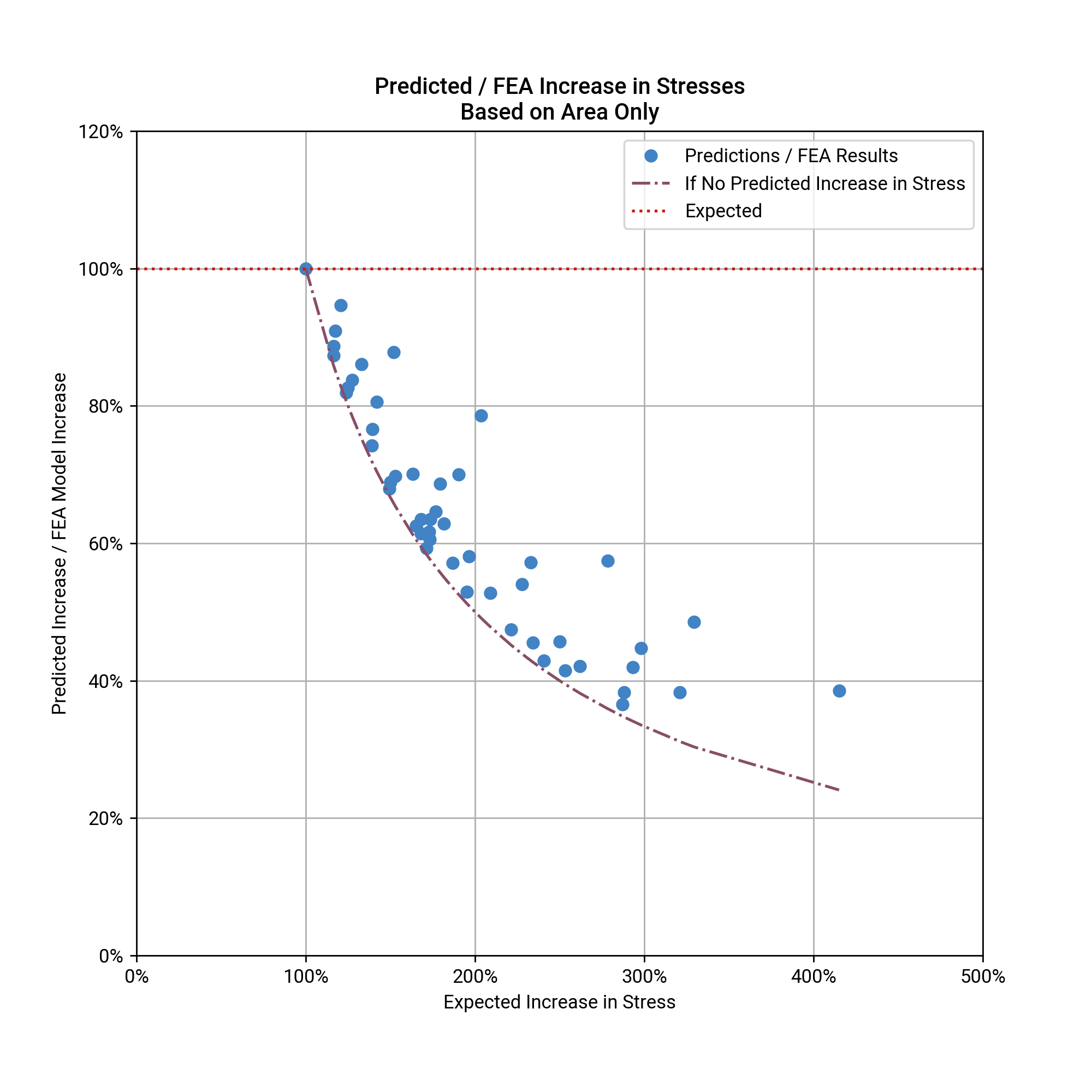 Using the reduction in thickness isn’t any better, only it overestimates the increase in stresses: 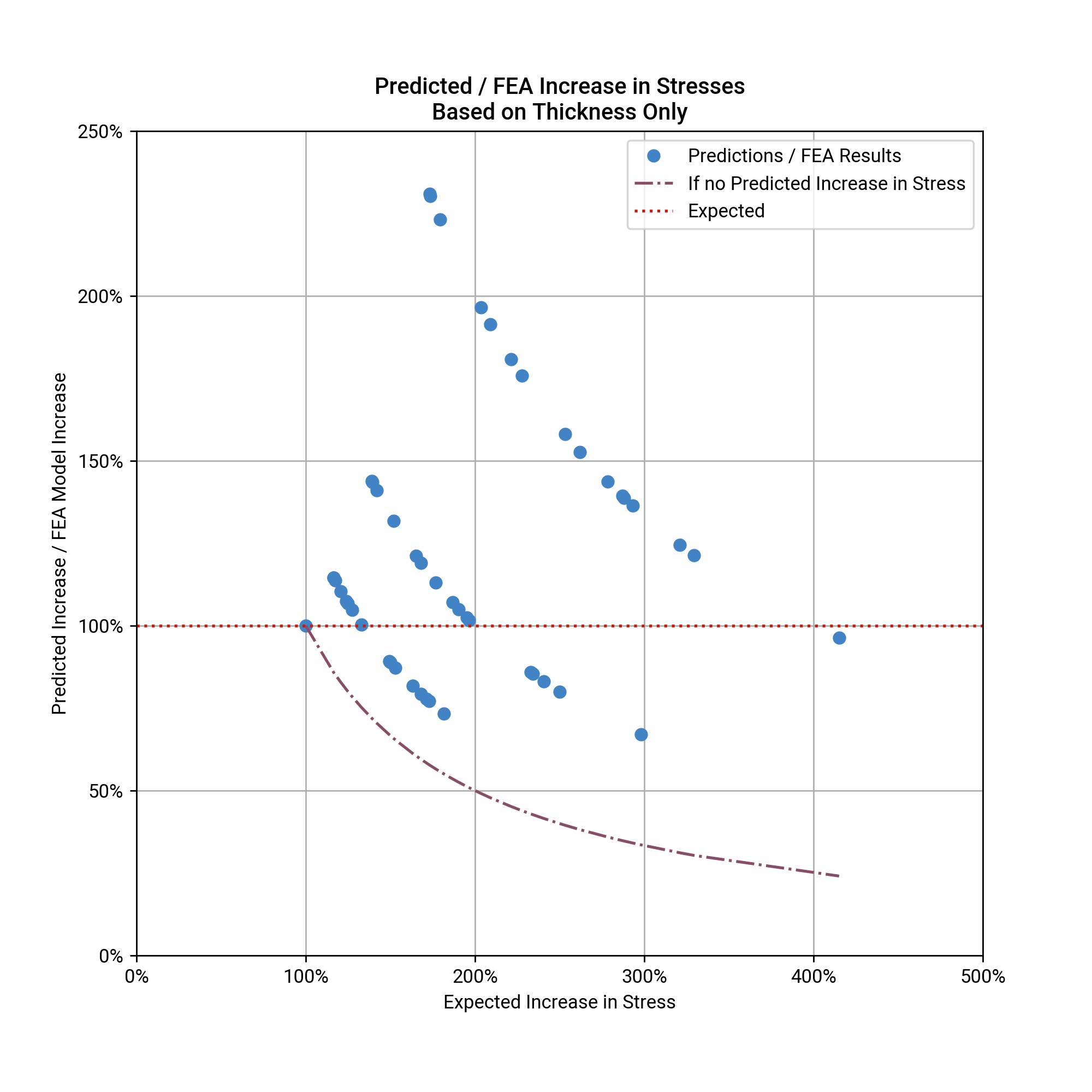 And trying to account for the local eccentricity in thickness overestimates things even more: 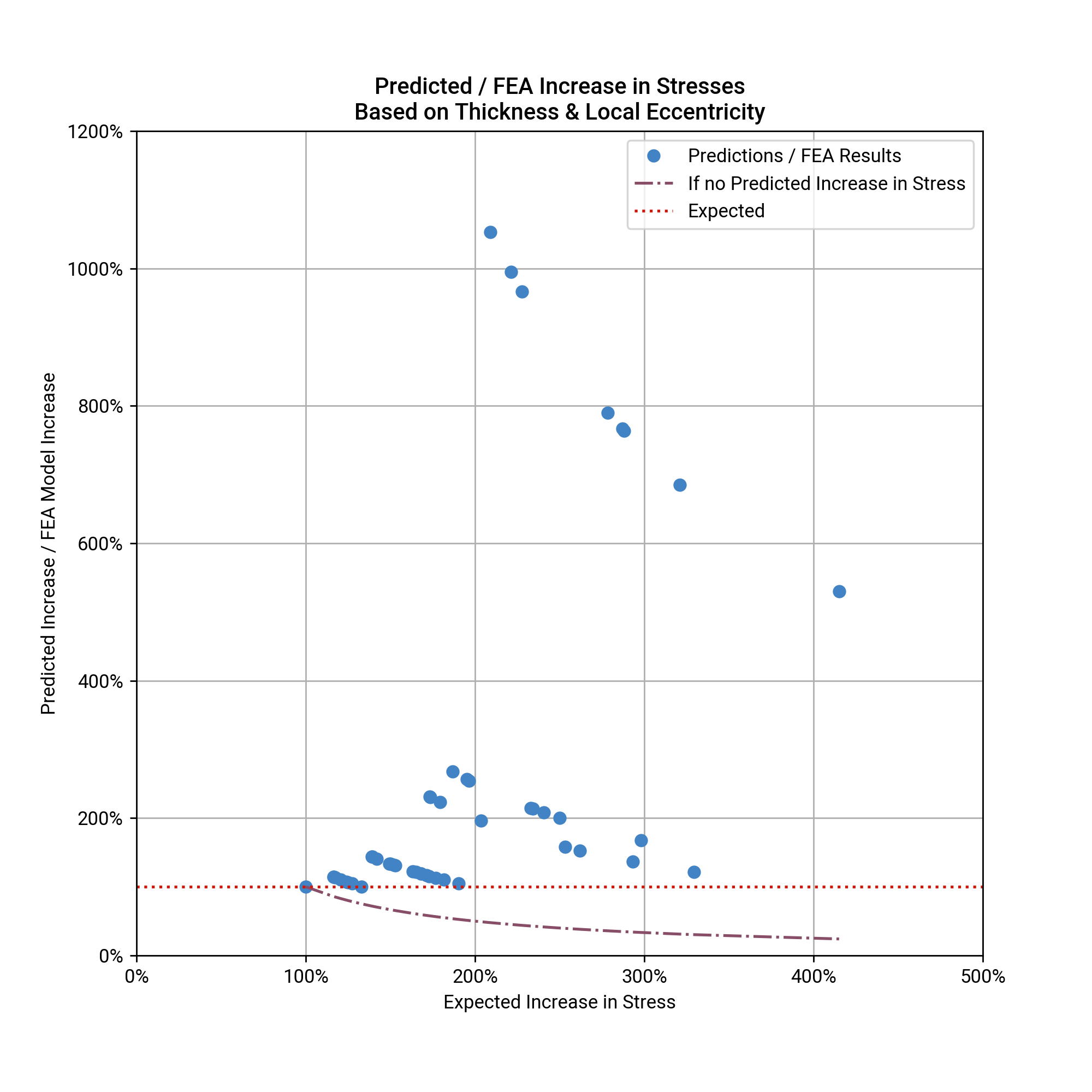 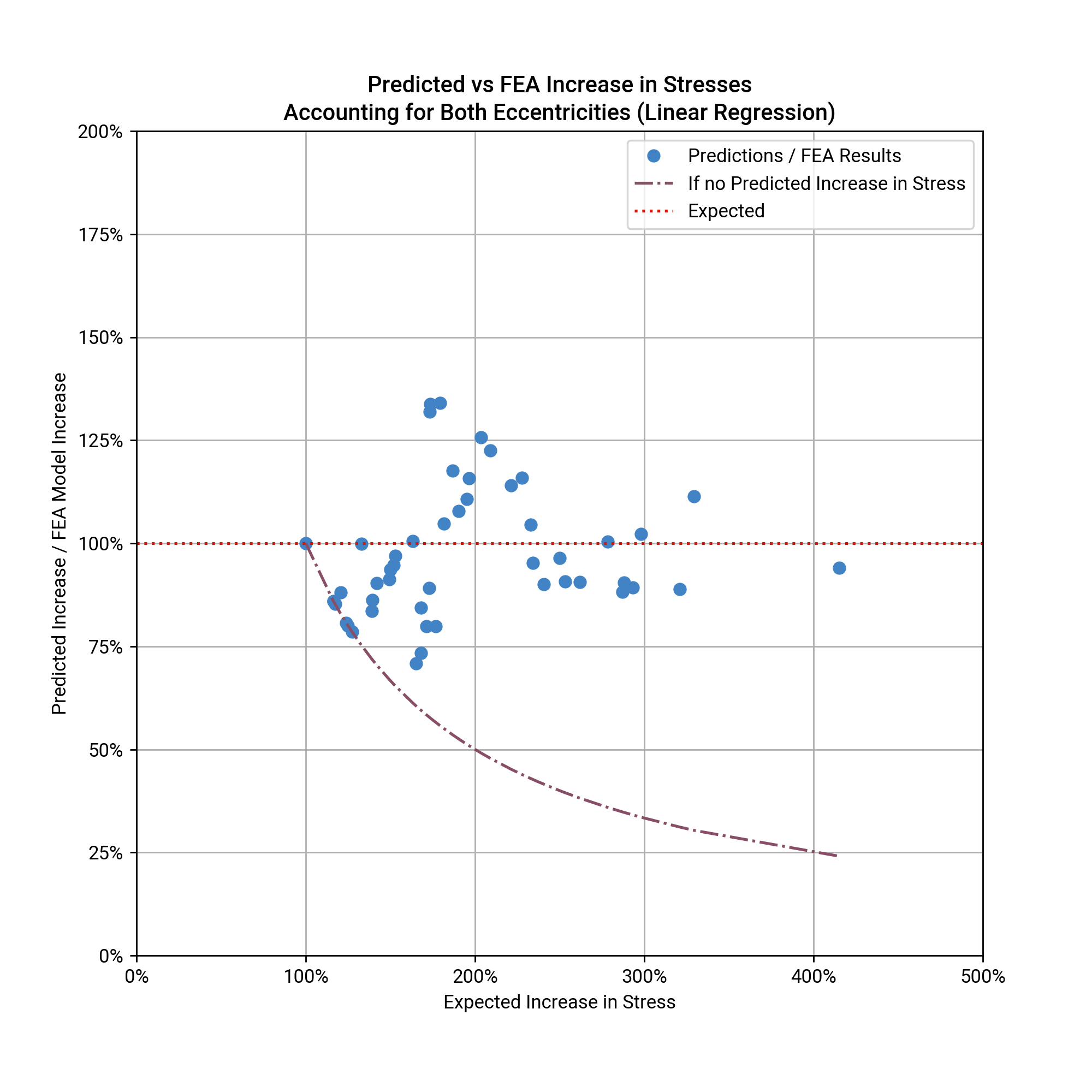 So why were my initial ideas for quickly determining the stresses wrong? And what else needs to be considered? A few things come to mind.

The results above can be summarised as follows:

This was an interesting exercise to go through. It helped reinforce some things I already knew (about ultimate behaviour of corroded steel). However it also made me aware of areas where my assumptions were grossly wrong, including but not limited to:

And it’s usually a good thing when you find out your assumptions are wrong, especially if its before something’s fallen down and killed someone.

It’s been a while since my last post. Family, work and other things have intervened to delay this one. Hopefully the next one will be quicker to get out…