What They Didn't Teach Me at University - Stiffness Part 2

In my last post I began by saying that I felt that I had missed out on the importance of stiffness in structural engineering while I was at University. I also gave an example of where considering the stiffness of a structure’s supports had been a useful tool. In this post I want to continue with another example where the stiffness of the structure itself (not the supports) was important.

Concrete deterioration is a common issue in structural integrity. Material processing requires large amounts of water to process materials and keep dust down, and often contains contaminants such as salt. Both of these can aggressively attack the steel reinforcement in concrete.

A recent project I was part of included an assessment of a large concrete reclaim tunnel with obvious corrosion of steel reinforcement in the roof and walls. The floor did not appear to have any corrosion occurring, but did have a very unusual pattern of cracking.

The client was concerned that the cracking could have been due to overloading of the tunnel. To me it didn’t look like overload cracking. However, there was no other obvious cause for the cracking. Additionally, reinforcement cover measurements showed that the cover thickness was a lot higher than designed (3-4x the design cover). This would have left the floor significantly weaker than designed.

I had to analyse the tunnel to determine if the repairs to the wall / roof would be safe, so it was a simple task to check the tunnel floor as well. Interestingly the first pass of analysis showed that the floor WAS overloaded under normal stockpile loads. Now I was in an uncomfortable spot - was the model wrong, or was my initial judgement on site?

The model showed that the floor could be overloaded and the cover measurements suggested the floor was much weaker than designed. On the other hand, I know from experience that stockpiles are usually run well above normal height. If the floor could be overloaded with a normal stockpile I would expect significant damage (more than a few relatively minor cracks) from 20 years of constant operation at or above normal stockpile heights. Finally, the crack widths and spacing were both inconsistent with overload. So the model was probably overestimating the loads or underestimating the capacity. 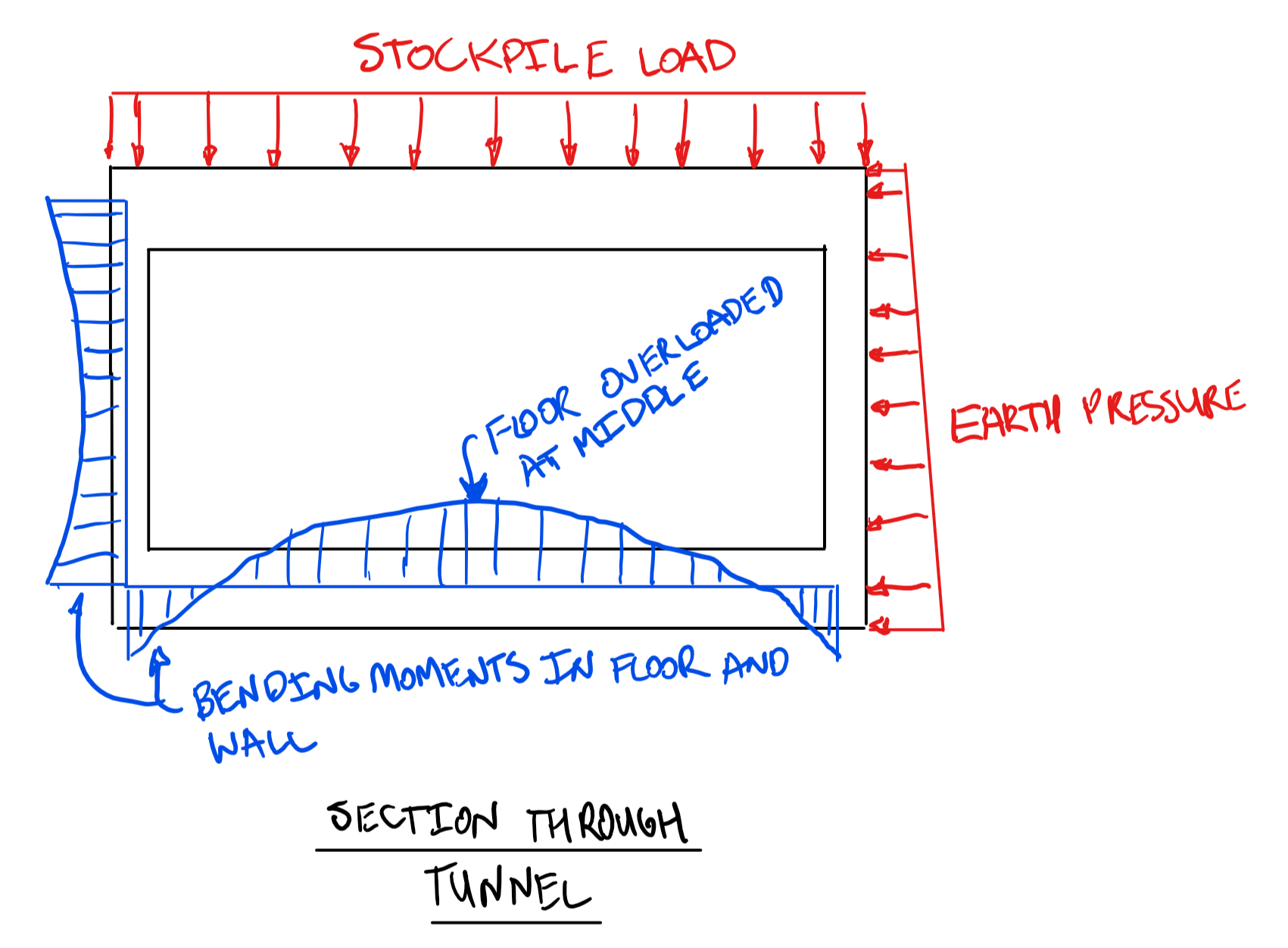 I could have spent weeks looking for every scrap of extra strength the floor could develop. Perhaps a detailed non-linear FEA model might give more capacity. I could measure the cover in more locations in case we’d accidentally measured it at the worst possible locations (we did try this but our GPR broke ☹). I could measure the stockpile density to see if it was lower than assumed. Or perhaps I could keep chasing my tail around and getting nowhere. This is where thinking about stiffness came to the rescue.

Concrete cracks under high loads, which reduces its stiffness. The tunnel was statically indeterminate, and any reduction in stiffness of the floor would transfer load to the walls which were only lightly loaded. One way of estimating this reduced stiffness is Branson’s equation:

The estimated stiffness of the floor at ultimate loads was significantly lower than the un-cracked stiffness. Even after reducing the stiffness of the walls and roof in a similar manner, a large portion of the floor load was transferred to the walls. All elements easily complied with current design standards (even with the high cover). This agreed with my judgement that the cracks in the floor were not related to overload.

This still left the question of why the floor had cracked in the first place. I eventually came to the conclusion that the very high level of reinforcement cover would have left the top surface of the slab very prone to shrinkage cracking. The commentary to AS3600 suggests that shrinkage cracks will likely be unacceptable if cover exceeds 100mm. In this case the cover in the floor was much larger than 100mm. The crack directions were also generally appropriate for shrinkage cracking. In consultation with others this was agreed to be the most likely cause.

So why did I miss the importance of stiffness at uni and early in my career?

I think the first reason may be that I went to a “practical” university. It had a high emphasis on skills that are useful early in a career and a low emphasis on the underlying theory that is often not needed until later, or not at all if you end up in project management or a non-technical role.

Analysis & design of many structures is often done by ignoring stiffness reductions at high load and assuming that all supports and joints are either perfect rigid or pinned. These are also easy examples to teach. After some hand analysis of simple structures and an overview of the matrix method students are shown a software analysis tool. From then on it’s so much easier to just model it, press “solve” and move on.

On the design side, most design is done to design codes and in Australia, at least for concrete and steel, the design codes are based on making sure your design satisfies strength and deflection requirements. The codes do not often have any (direct) requirements for stiffness. Therefore if you’re teaching a student to be an immediately “useful” engineer who can design to the codes you can ignore stiffness.

When you graduate and begin to practice it’s the same. You build a model in an analysis program, choosing section properties from a library of standard sections, not realising that as you choose you’re actually choosing the stiffness of your model. Then you press “solve” and get out forces and displacements for your code checks and move on without thinking about stiffness.

Finally, in structural integrity a LOT of design is localised around very local damage, and a lot of repairs are done in-situ, simply overplating members to restore their strength. If you are taking an existing member or connection and restoring it, you are usually not changing the stiffness too much relative to the original design, so you can often ignore it.

In one sense this is making a mountain out of a molehill. Plenty of engineers graduate without knowing a lot about stiffness and:

However the concept of stiffness can be very useful to have. It can be used as an additional tool in the engineer’s toolbox, to show that certain problems don’t (or do!) need further analysis. It can also prevent you from chasing your tail around in circles trying to make things stronger when in reality making them attract less load may be an easier solution.

Finally, most structural analysis software is based on the Direct Stiffness method of analysis which treats a structure as a collection of springs and solves for their combined displacements and forces. This approach assumes that the stiffness of the structure is fully known - the forces and displacements contain the unknowns. It seems odd that engineers should ignore the only part of the solution process they actually fully specify!

So What To Do?

Universities - at least those like mine - may need to focus a little bit more on theory (if you went to a sandstone university, maybe you dream in stiffness matrices). However even without that, simply using some more real world examples like those discussed on this blog would go a long way to reinforcing the importance / usefulness of stiffness. For example, I remember briefly learning about Branson’s equation in my uni course, with a sterile example “this is how we calculate the stiffness of this imaginary beam”. A real world example similar to the concrete tunnel above would have helped demonstrate the concept and showed a real world example of it being used, reinforcing its usefulness and importance.

Analysis software writers may have a role to play here as well. Many of the users of these packages couldn’t care less how they work inside or remember back to their analysis of structures courses. Perhaps their user interfaces could provide some reminders to the users that when they specify material properties or choose section dimensions they are really choosing the stiffness of their model. Simply calling the beam properties dialog box the “Beam Stiffness Properties” dialog may help.

Finally, practicing engineers should continue to do what they have always done - teach their graduates what they really need to know (in addition to what they were taught at uni)!